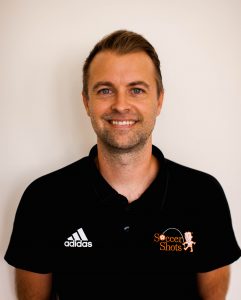 Matt Simmons, Executive Director
Matt was born and raised in Peru, South America. Growing up in Peru, Matt developed a passion for “futbol” (Soccer) and has been playing soccer since the age of 3. While in Peru, he had the opportunity to work with children at the local Youth Soccer Academy. This is where his passion for coaching youth soccer began. Matt moved to the USA when he was 17 and played soccer in High School and College. Matt loves working with kids and teaching them not only soccer skills but also lessons in character through the sport of soccer. He now resides in Columbia, SC with his lovely wife and their two children.

“Soccer has been a passion for me for as long as I can remember. My father played soccer in college and passed along his love of the game to my brother, sister and me. Growing up in Peru was an amazing experience for me. Soccer was a part of everyday life. We grew up playing soccer on dirt courts and dirty streets. Sometimes if we couldn’t find a soccer ball we would use a make shift ball made out of rolled up banana leaves. Nothing would stop us from getting in a game or two every day. The friendships I made through soccer I still have today. Through soccer I learned the importance of teamwork, respect, discipline and also the need for living a healthy and active lifestyle. I love Soccer Shots because it gives me and my coaching staff a platform to pass on these important principles to every child and family we serve.  I love what Soccer Shots is all about and I hope we have the opportunity to serve you and your child soon.”