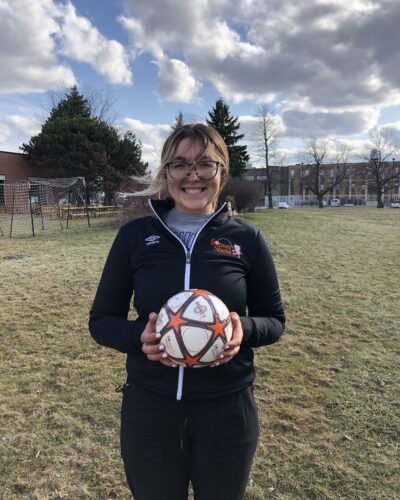 Coach Ola was born in Mississauga and raised in Cambridge.  Ola began playing soccer at the age of 4 and continued to play all the way through to high school, where she was a member of her high school varsity team.  She is currently attending the University of Guelph and is studying Child Studies with the goal of one day becoming a kindergarten teacher.  Ola is excited to be working with the wonderful team at Soccer Shots and looks forward to making a positive impact on her soccer friends by helping them develop both on and off the field.  Coach Ola cannot wait to meet everyone on Soccer Island! 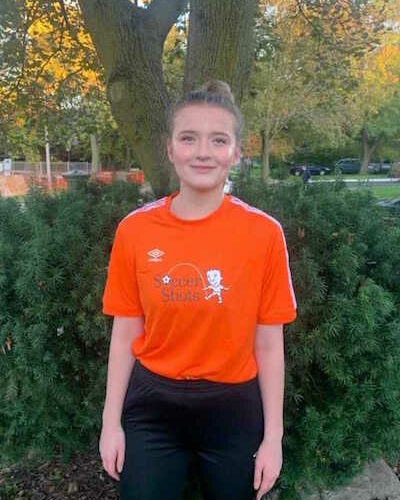 Born and raised in Oakville, Juhl began playing soccer at the age of 4. Motivated by her passion for sports, Juhl played for the Oakville Soccer Club from U10 to U15 as well as the Oakville Thunder Volleyball Club from U13 to U17. She has recently graduated from Queen’s University where she studied Biology and is currently enrolled in Niagara University’s teaching program. Juhl has worked tutoring students for over 5 years and is passionate about helping kids learn and discover their potential. Coach Juhl is excited to bring fun, teamwork and positivity to her friends on Soccer Island! 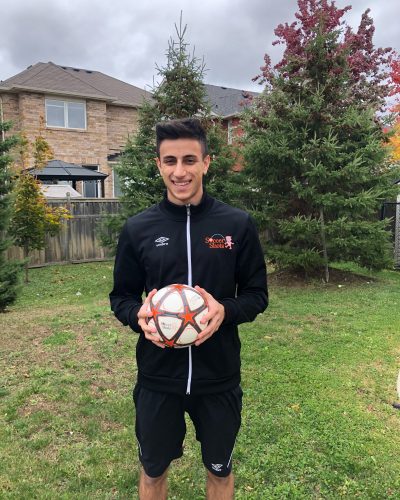 Born and raised in Mississauga, Zen has been playing soccer since he was 4 years old. He was able to win the Ontario Cup with Oakville Soccer Club and currently plays with Sigma FC in League 1. Zen has always participated in athletics with his school teams such as: swimming, basketball, volleyball, and football. He loves working with children and enjoys seeing them have fun, grow and develop through the game of soccer. Zen currently studies Business Administration at the university of Guelph-Humber. 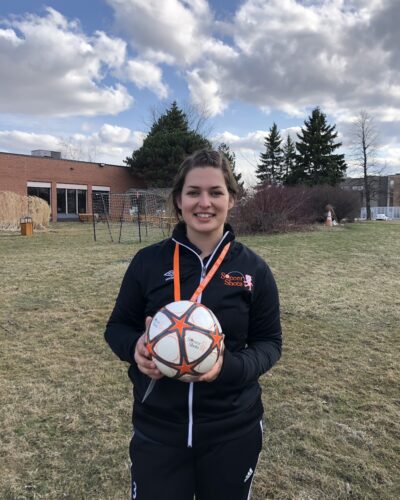 Born and raised in Burlington, Coach Mikayla started playing soccer at the age of 3 with the Burlington Youth Soccer Club.  Falling in love with sports, she was a member of many teams, including basketball, soccer, volleyball, field hockey, and ultimate frisbee.  Her ultimate passion was soccer and she played for the Burlington Bayhawks for over 4 years.  It was here that she developed her skills and learned the importance of playing as a team.  With an interest in human movement she attended Windsor University where she received her bachelor’s degree in kinesiology.  In her spare time, she coaches children’s soccer programs with local clubs and loves sharing her passion for the sport with junior players who are so excited to learn. She is now continuing her education at Sheridan College, enrolled in the Athletic Therapy program.  Coach Mikayla is so excited to work with the young stars of Soccer Shots! 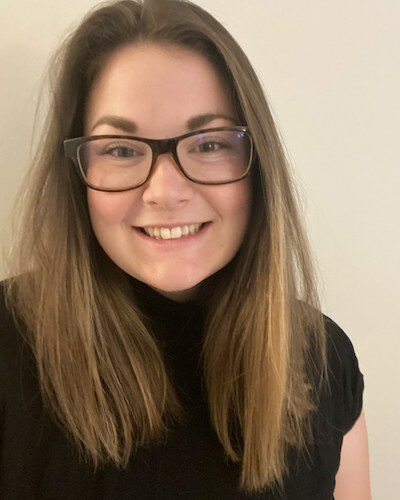 Coach Jane was born in Oakville and grew up in Burlington. While growing up Jane played many years of soccer and field hockey. Jane has studied kinesiology at Wilfred Laurier University and earned her bachelor’s degree of Kinesiology in 2019. Coach Jane has worked with children in the classroom and taught and coached youth sports at various summer camps. Coach Jane is excited to work with all of the children and coaches at Soccer Shots to create a fun and safe environment to promote a lifelong involvement in soccer and physical activity! 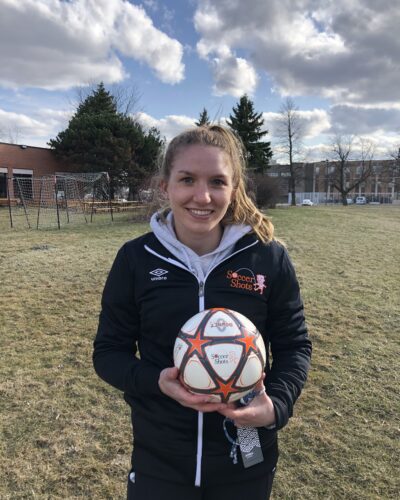 Coach Kathryn was born and raised in Mississauga and started playing soccer at the age of three.  She played for the Oakville Soccer Club from U10-U18 and also played hockey, lacrosse, and track and field over the years.  She attended Wilfred Laurier University, studying Biology and Chemistry, and will be attending U of T’s Masters of Teaching program in the fall.  Kathryn loves to help others, find their passions in life, and she is looking forward to guiding young soccer players while delivering the Soccer Shots experience! 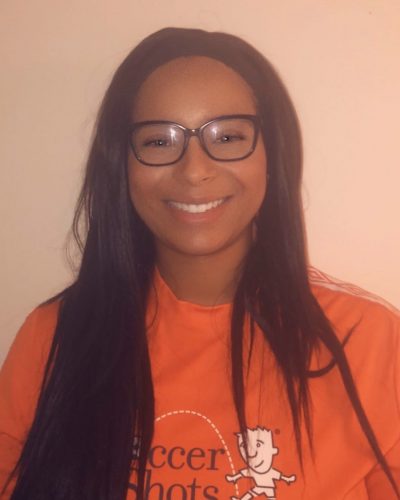 Yasmine was born and raised in Edmundston, New Brunswick. She started playing soccer at the age of three and played every summer until high school. Throughout her childhood she also did figure skating, basketball, and swimming. She studied kinesiology at the University of New Brunswick and coached children soccer at the local YMCA. Yasmine is currently studying Athletic Therapy at Sheridan College and spends her free time coaching young children who are eager to learn and have fun! 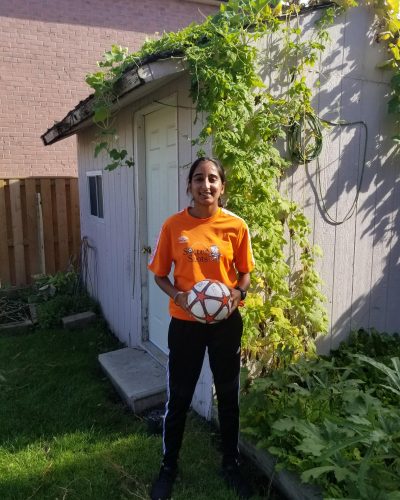 Born and raised in Brampton, Coach Josh is a self-proclaimed female version of Pascal Siakam; a basketball player with a passion for playing and coaching soccer. Josh started working with kids when she was in high school and volunteered as a tutor at Kumon. She continues to inspire youth as a basketball coach and high-school mentor. Josh is currently working towards a bachelor’s degree in Biology and Psychology at McMaster University and hopes to attend medical school in the future. When she’s not studying, you’ll find her playing basketball, cheering on the Toronto Raptors and convincing her dad that she’s the best soccer player in the family. Josh is looking forward to sharing her passion for soccer with our Soccer Shots stars on Soccer Island! 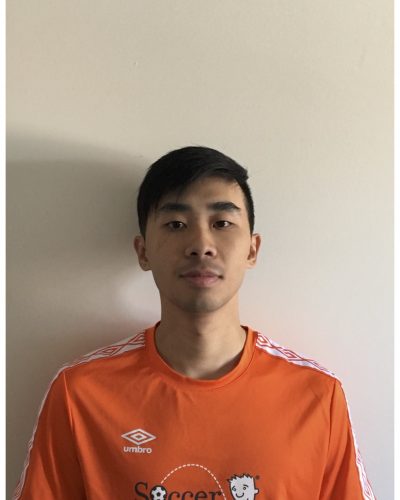 Brian has been playing soccer since he was six years old. He has a great passion for the beautiful game and wants to pass on that passion to the youth through Soccer Shots. Brian is studying Social Work and plans to help children with his education. He is excited to help develop children through soccer! 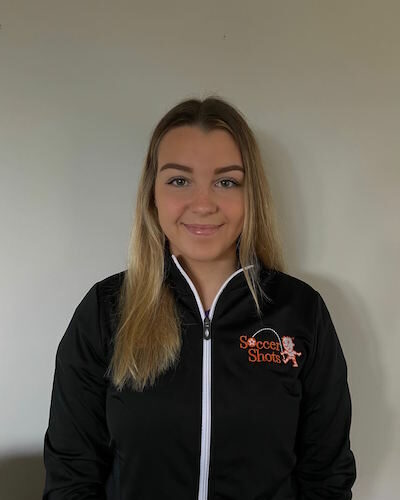 Coach Adriana was born and raised in Mississauga.  She has been playing soccer since she was 3 years old and has participated in many sports throughout her high school years such as volleyball, soccer, frisbee, and flag football.  Adriana is attending Brock University where she is studying to become a teacher and currently plays on the Brock Women’s Soccer Team.  She has had years of experience working with children such as babysitting her cousins and working as an occasional school room monitor at a middle school.  Adriana is looking forward to working with the young soccer players and ensuring that they all have an amazing experience on Soccer Island! 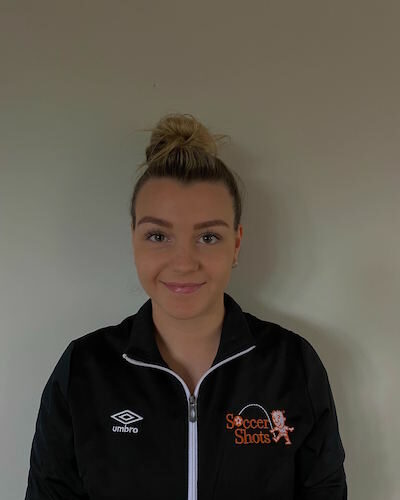 Coach Ivana was born and raised in Mississauga.  She has been playing soccer since the age of three and has a great passion for athletics.  Ivana has taken part in various sports such as track & field, cross country running, volleyball, basketball, flag football, and ultimate frisbee.  Ivana is a student at Brock University where she is studying to become a teacher and currently plays on the Varsity Women’s Soccer Team.  She has a great passion for working with children and has years of experience through babysitting and being an occasional school monitor at Dolphin Senior Public School.  Ivana is excited to meet and coach all of the children of Soccer Shots and will strive to create a fun environment where each child can grow and learn valuable lessons! 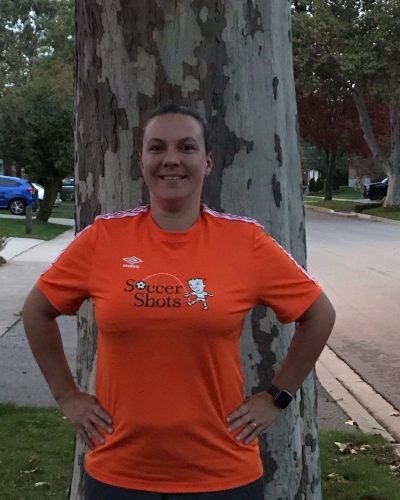 Kinga moved to Canada at the age of 10 and instantly her family enrolled her into soccer. She played soccer throughout her youth in Guelph and grew to love the game. She was on the Athletic Council in university and played many different intramural sports. Kinga has organized soccer tournaments for ALS the past 5 years to raise awareness and funds for research. She is a proud mother of two and loves teaching children. She loves soccer and doing anything outdoors! 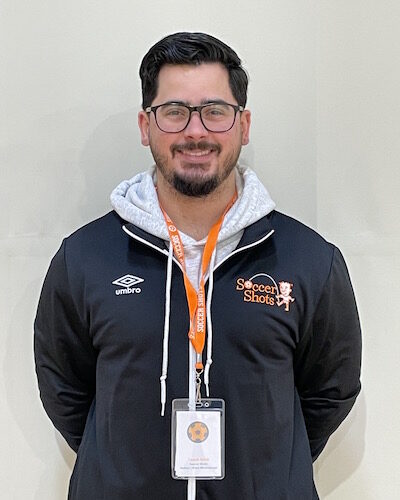 This is not a glitch soccer friends, Erick is the identical twin brother of the DOC here at West Mississauga and Halton Soccer Shots!

Born and raised in Havana Cuba, Erick grew up playing soccer in the streets while participating in gymnastics as part of his school program at the time. At the age of 6 Erick and his family immigrated to Toronto, Canada and was raised there until he was 12. In those 6 formative years, in a new land and country as well as adjusting to and learning a new language and culture, playing soccer alongside his twin brother was what aided Erick to grow in confidence. A love for teamwork alongside joy and passion grew inside of him for the sport of soccer and ultimately motivated Erick to play at the highest levels of the sport in the province, all the way into the Academy of Toronto FC’s inaugural U-18 team. After a year at TFC, Erick headed off to New York, where he completed a Bachelors of Arts in Biology at Manhattanville College while being a part of the mens soccer team at the school. After school was finished, Erick returned back home to Milton, Ontario, where he continued to play and captain his hometown team, Milltowne FC. Following Milltowne FC, Erick went on to compete in Ontario’s League 1 with Prostars FC before turning to coaching soccer all around the GTA. Now, in 2022, Erick is very excited to be a part of the Soccer Shots team and doing his very best to provide the best experience for every child on soccer island! 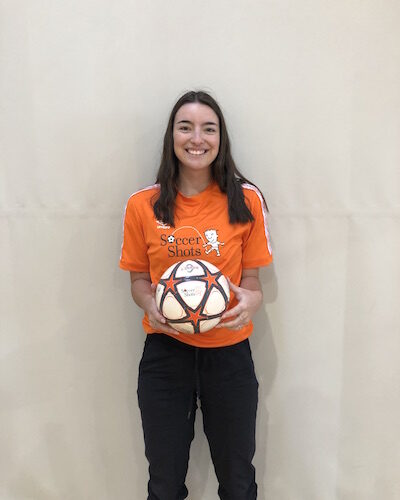 Coach Brittany grew up in Barrie and has played multiple sports throughout her life. Soccer was her first organized sport at the age of 3 and has been engaged in many sports ever since. She excelled in volleyball from elementary school to high school and is now on the Women’s Volleyball team at Sheridan College, where she studies Athletic Therapy, set to graduate in 2025. Brittany has worked with kids in sports joining the Soccer Shots team, organizing activities at daycares and camps as well as coaching high performance girls volleyball teams. In her free time, she loves cooking delicious vegan meals, staying active and travelling anywhere she can go hiking or camping. Coach Brittany cannot wait to get onto soccer island with all of her new soccer friends at Soccer Shots! 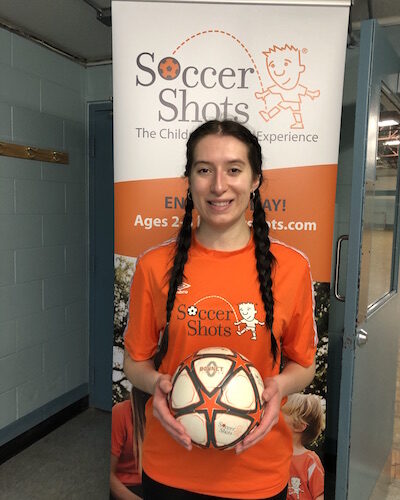 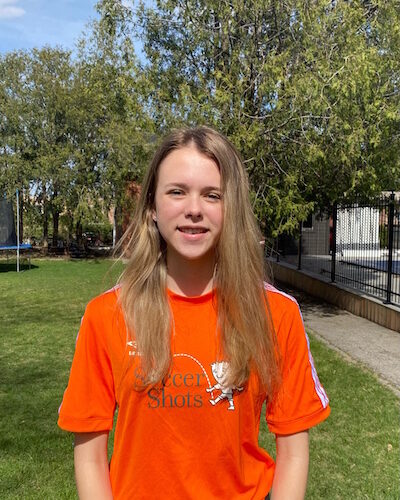 Raised in the West Toronto Area, Coach Hannah played house league soccer throughout elementary school with the Toronto FC as well as on her school team. Hannah participated in competitive gymnastics for 9 years and represented Team Ontario in various competitions. Hannah attended Bishop Reding Catholic Secondary School and is currently attending McMaster University. Hannah loves working with kids and has had experience working with children through her church and gymnastics programs. Coach Hannah cannot wait to get onto Soccer Island and positively impact the children of Soccer Shots! 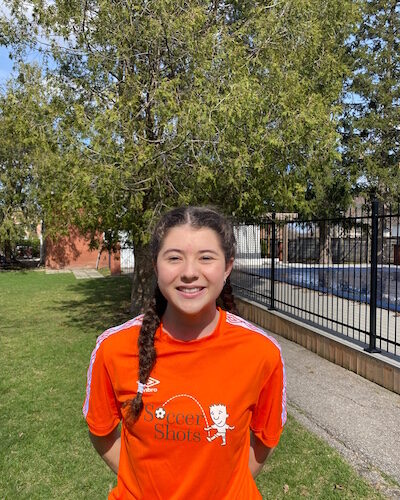 Coach Rebekah grew up in the Toronto West End, moving to Milton in time to start middle school. Rebekah played soccer in the Toronto High Park FC – Swansea House League before focusing on gymnastics. Rebekah was a competitive gymnast from the age of 5 years old. Before retiring, Rebekah’s gymnastics achievements included competing in Level 9 at the age of 13. Aside from sports Rebekah enjoys working with children where their individuality is highlighted and they are able to discover their strengths. Rebekah is eager to help young soccer friends discover the important foundational skills soccer has to offer while at the same time having fun!