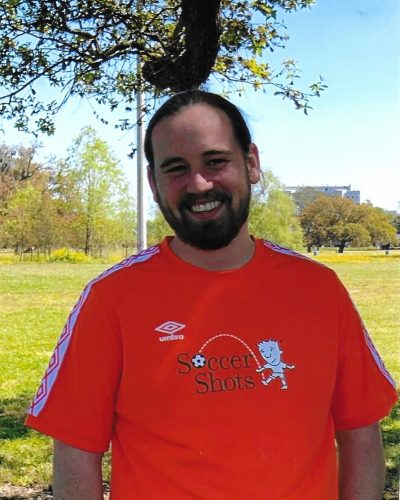 Coach Zach graduated from Belhaven University in Jackson, MS and has a long history with sports. While growing up, his dad was a Physical Education teacher at a private school in Florida. He spent every summer and every day after school in the gym or on the field playing. This leads him to have a healthy active lifestyle as an adult. He believes that having a positive first impression with sports can make a huge difference in a child’s life. Zach’s mission is to provide that for every child in Soccer Shots New Orleans. 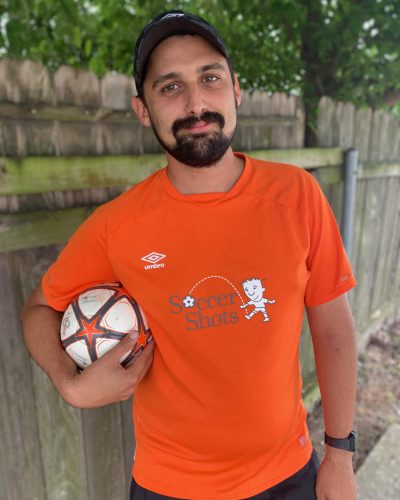 Originally from West Hartford, CT, Coach Kevin studied Movement & Sports Studies with a minor in Athletic Coaching at Springfield College in Springfield, MA. Kevin first came to New Orleans shortly after Hurricane Katrina on multiple occasions to help rebuild homes damaged by the storm. It was during this time that he decided to make New Orleans his home. Before joining the Soccer Shots team, he was a Sports & Games Director for an overnight summer camp, a Program Coordinator for a national non-profit, and a Camp Director for a day camp specifically for children with behavioral challenges. Kevin spends his free time playing a variety of sports as well as creating and listening to music.

As Director of Coaching, Kevin is responsible for leading the Coaching Support team as they recruit, hire, and train new coaches as well as maintain the highest possible quality of programming. He is passionately committed to developing positive behaviors in young children and providing a healthy introduction to sports. 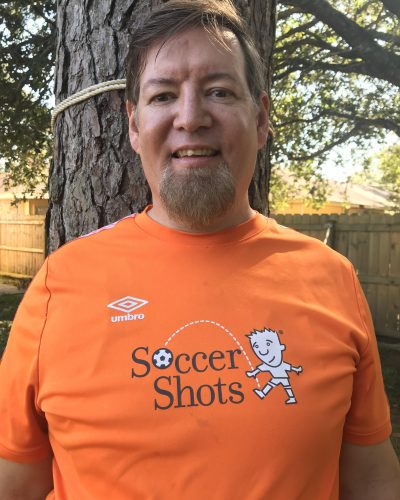 Coach Wyman is a New Orleans, Louisiana native. He grew up playing soccer at Plantation Athletic Club on the Westbank. After studying at Oral Roberts University, Coach Wyman moved back to Louisiana on the Northshore.  Coach Wyman has 10 years of experience working with kids as a children’s and youth pastor. He has also coached basketball at Pelican Park in Mandeville. Coach Wyman loves not only teaching soccer skills, but character values as well. 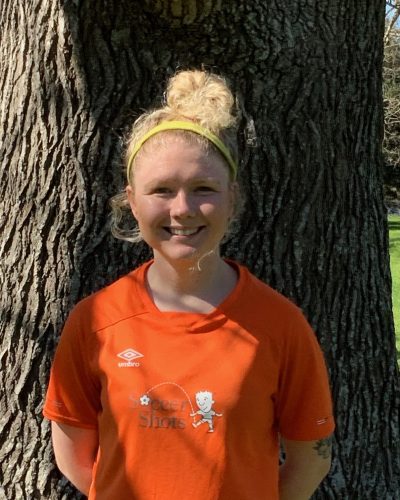 Coach Ashley grew up in Milwaukee, Wisconsin where she played soccer starting at the age of five.  She played competitive soccer and was a part of the Olympic Development Program. She went on to play soccer in college in Dallas, Texas where she pursued her degree in Church Ministries.  In 2011, she moved to New Orleans where she became a leader at a church where she teaches kids weekly. Being able to be a positive influence in kids life is something she is very passionate about. 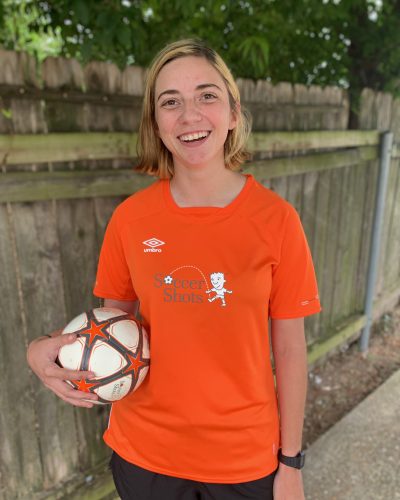 Amelia is a graduate of Tulane University, where she obtained her degree in economics (numbers are her jam!)  She was a US Park Ranger for two seasons before returning to New Orleans to work at Soccer Shots as our Operations Coordinator. When she’s not doing Soccer Shots things, she’s working on one of the political campaigns she’s helping out on or thinking about her next Fantasy Football move! Coach Amelia also has two foster pups named Lula Mae and Tugboat. 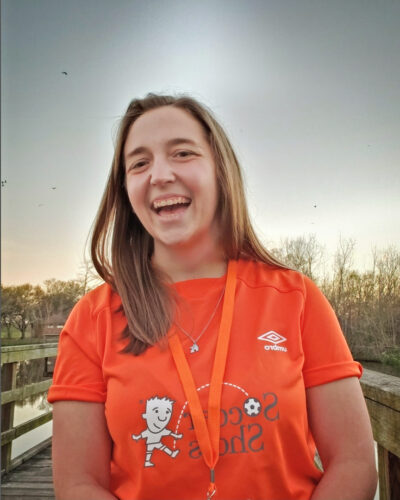 Coach Charlye was born and raised in Western North Carolina. She began playing soccer when she was 3 years old and continued the sport as she later played collegiate soccer for Montreat College near Asheville, NC. Charlye spent nearly 4 years working and volunteering in various group homes for foster children and has over 7 years of experience working with children in a variety of settings. Upon completing her Bachelor’s degree in Psychology, Charlye decided to move to New Orleans to attend the New Orleans Baptist Theological Seminary. She is currently pursuing her Master’s in Marriage and Family Counseling and hopes to one day become a licensed counselor concentrating in trauma therapy. In the meantime, she enjoys exploring New Orleans, bike riding, traveling, and trying new food! 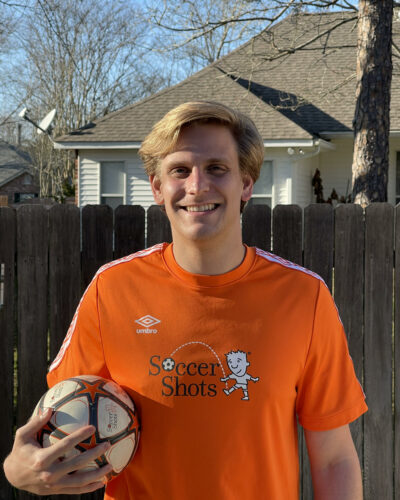 Coach Andrew was born and raised in Covington, LA where he attended Saint Paul’s High School. He later moved to Baton Rouge, and in 2020, completed an undergraduate degree in Kinesiology from Louisiana State University. Soccer has been an integral part of his life since he was 5 years old, all the way through high school where he helped his team become ranked number one in the nation! Currently, he is a pre-med student looking to get involved in his community by passing down his knowledge of soccer and help build self-confidence in kids. Outside of coaching at Soccer Shots, Andrew spends his time studying, playing video games, and watching professional soccer games. 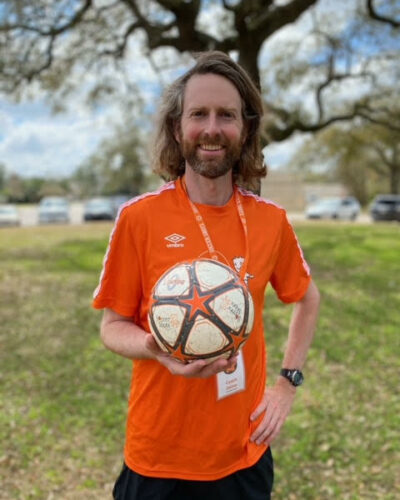 Coach Jamie grew up outside Boston and spent his early years playing soccer and baseball and skiing around New England. After graduating with a degree in exercise science from the University of Colorado at Boulder, he moved back home to Boston, where he was constantly recruiting his friends to play with him on recreational soccer teams. After earning a graduate degree in Environmental Health from Boston University, he moved to New Orleans in 2016 to work in laboratory science at LSU and Tulane. He loves being outside and an active member of the New Orleans community. 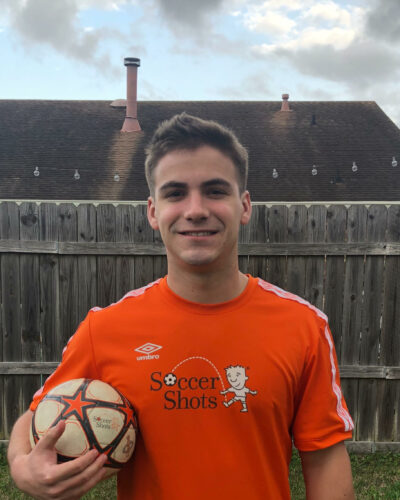 Coach Zack grew up in Kenner, LA, and attended Brother Martin high school. He has a love for the game and has played soccer his whole life. Currently, Zack is attending Tulane University where he is working towards his Information Technology degree and is also a member of the national guard. He loves helping to spread his knowledge of soccer to kids and making an impact in the community. 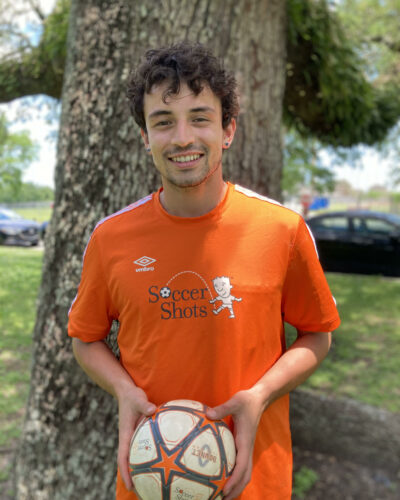 Coach Jon was born in Salt Lake City and has been playing soccer since he was 7 years old. He graduated from Marquette University with a degree in Digital Media and Writing Intensive English. He moved to New Orleans in 2018. Off the field, he is a guitarist, a chess player, and the best friend to his dog, Bruno. He is excited to be a part of the Soccer Shots team, where he can share his excitement for soccer and the valuable life lessons that come with it. 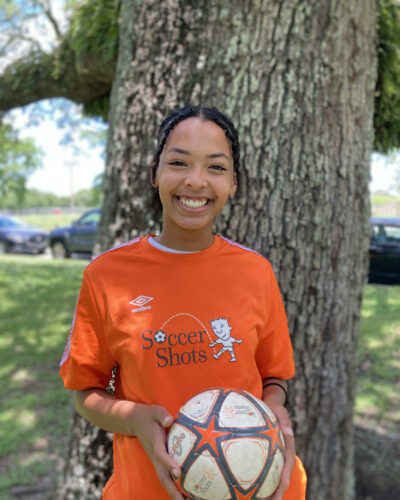 Coach Mak was born and raised in Lancaster Pennsylvania. She has been working in the childcare field for over two years and aspires to be an educator one day. Coach Mak moved to New Orleans recently to continue her college experience as a sophomore in the fall. She loved playing games (including soccer) with kids at recess during her last job as an Assistant Teacher. Coach Mak values giving children an environment where they can be confident and have fun. 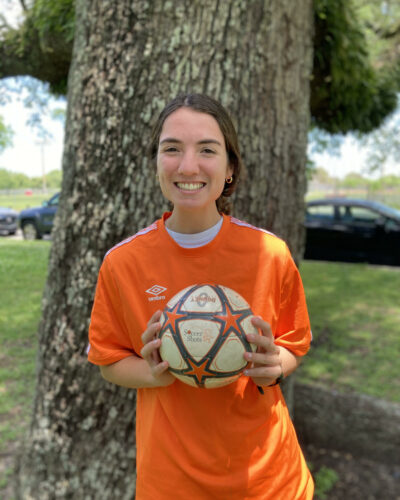 Coach Paige is from Rhode Island and is in New Orleans for school. She is currently studying public health and political science at Tulane University. Paige grew up playing a variety of sports and currently plays frisbee at college. She has been working with children for years, and also works with autistic children at a clinic. In her free time, she loves walking, volunteering, and exploring New Orleans, and is a proud cat mom. 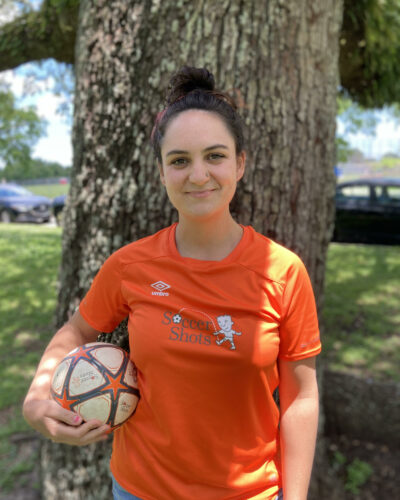 Coach Addy grew up in Connecticut, attended college in Iowa, and then moved to New Orleans in 2011. 10 years later, she could not be happier about her decision to make New Orleans her home. She currently lives with her husband, one pug, and too many cats to count. Before coming to soccer shots, Coach Addy was a veterinary technician and a comedy performer. Addy comes from a long line of soccer players and coaches and continues in their footsteps as a personal trainer. She enjoys helping adults and kids alike find joy and confidence through movement. Addy loves working with children for their natural comedic talent and boundless energy. When she’s not coaching she can be found practicing Kung Fu, gardening, and completing mediocre home improvement projects. 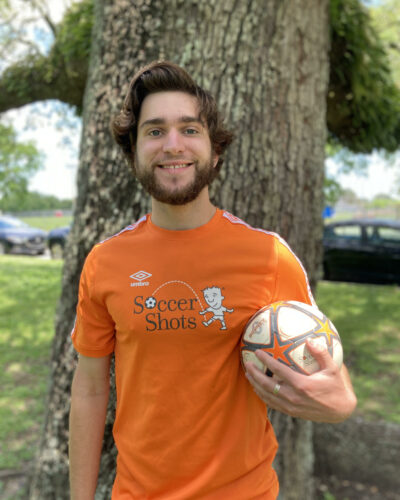 Coach Brian is originally from New Jersey and grew up as a Sports Enthusiast. Initially participating in basketball, lacrosse, and soccer, he later directed all athletic focus on his tennis game throughout high school. Coach Brian has been working with children in youth athletics for almost 3 years and loves to help kids build confidence through sport. Along with coaching, Brians’s passions lie in nature, adventure, and music.

Coach Grace moved to New Orleans after graduating from Davidson College, where she (and her now fiancé!) competed on the track and field team. Now she is completing her Masters in Accounting at Tulane, while looking to connect with the local community through soccer. In her free time, Grace loves walking her dog, baking, and spending time with family.

Coach Britney is originally from St. Louis, MO where she started playing soccer at the age of 4. Many years and several states later, soccer is still her favorite passion and pastime. Britney has a background in athletic training and elementary education.  Through her classroom experience, she has learned that instilling positive character traits and values are just as vital for young children to learn as education is. In her free time, she enjoys traveling, spending time with her husband and 2 fur babies, and crafting.

Coach Jack was born in Chicago, IL but moved to New Orleans in 2018.  He graduated from Tulane University in 2021 with degrees in finance and management.  He works full-time as a project manager for TELA Construction, but is very passionate about soccer and youth sports.  He loves New Orleans and hopes to never leave.  His hobbies include cooking, travel, guitar and recreational sports.  He values his experiences as both a player and coach and hopes to provide the same opportunity to young players.  His goal is for our athletes is that they become more confident and conscious players.

Connie is an accomplished Chief Financial Officer for Simon & Boulangger Investments, LLC with over 15 years of experience in Financial and Healthcare Markets. She caters to major companies, non-profit organizations, evangelicals, and health care providers. She works well with senior executives  and  provides consultations for international organizations. Born in Lima, Peru and raised in Metairie Louisiana, Connie has successfully nourished her insatiable passion of raising up leaders in a unique manner. A graduate of Grace King High School, she became one of the youngest soccer captains and led the Lady Irish to the 5-A State Playoffs in 2003 and District Championship in 2004. After Hurricane Katrina struck her city in 2005, she relocated to Birmingham, Alabama where she finished college and taught leaders all around the country. In 2016 she met the love of her life and got married in 2017. Her family lived in Miami, Florida for 4 years and as a result of the pandemic, they then relocated back home to Louisiana. Connie and her spouse currently reside in Covington, LA where they are raising their one-year-old fury-child Rolf Alexander Boulangger III.