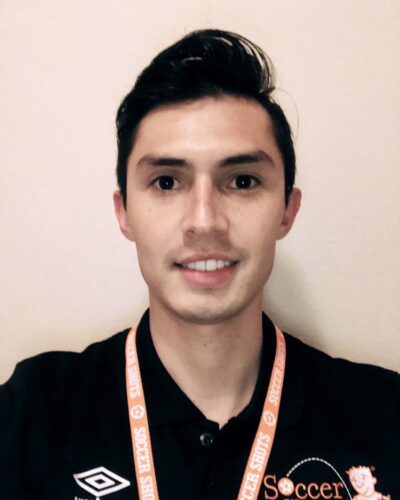 Jairo and his Family are originally from Bogotá, Colombia, where he grew up playing soccer since he was 6 years old. He attended UDCA University, where he obtained a Sports Science Degree.

After working as a Fitness Coach in Colombian Pro Soccer Women’s league, Jairo accepted a work offer from Gwinnett County parks and recreation in Georgia. Jairo’s career with Soccer Shots began in Georgia, where he served as full time coach. During his time with Soccer Shots, Jairo coached over 400 children ages 2-8 over a period of 3 years. After falling in love with the mission of Soccer Shots and the ability to positively impact young lives, Jairo and his family made the decision to move to Kansas and launch Soccer Shots in Overland Park.

Jairo’s family is passionate about sports, and his wife, Tatiana, has a bachelor’s degree in Physical Education, Recreation and Sports. In their spare time, they enjoy being outdoors with their daughters, Ana & Alanna.

Coach Julian was born and raised in Kansas City. His current favorite color is white because it can become any color. He went to ArchBishop O’hara High School and then continued his education at Rockhurst University where he earned his Bachelors in Sports and Exercise Science. Coach Julian has been playing soccer since he was three and plays where and whenever he can. His favorite sports team is Real Madrid and favorite skill is the maradona. He has just over 4 years working with children of all ages. His favorite part about coaching is being able to see kids just enjoy themselves and have fun. 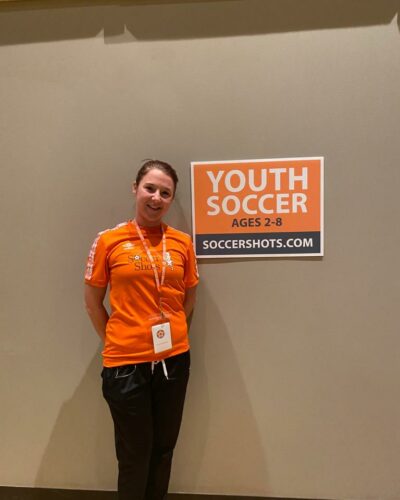 Coach Ashley works for the Olathe Public School District as a first grade teacher.  She has always loved working with kids from nannying to teaching to coaching.  Growing up she played soccer and later found a love for tennis.  Ashley’s goal is to help children to grow socially, academically and social emotionally through the use of sports in their lives.  Coach Ashley believes that through sports (specifically soccer) children learn life long skills such as confidence, teamwork, hard work and self worth. 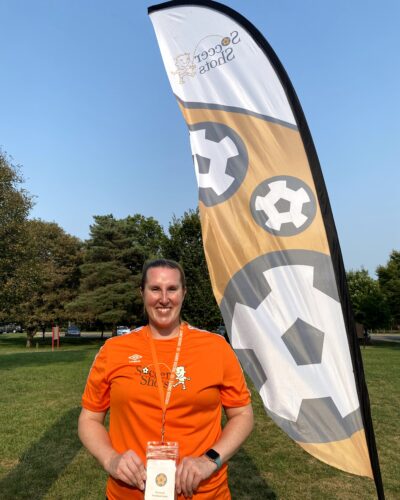 Coach Hannah is a native Kansas Citian who started playing soccer when she was five years old. Growing up, she played on several club teams and for her high school team. Coach Hannah received her bachelor’s degree in Business Administration from the University of Kansas, and she is currently pursuing her MBA from UMKC. Coach Hannah enjoys attending and listening to musical theatre, watching soccer and college basketball, and spending time with her two dogs, Copper and Izzy. 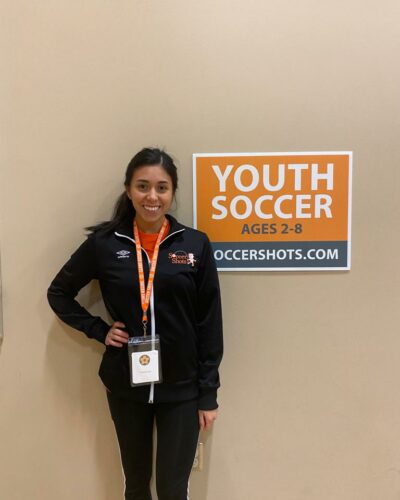 Coach Val has been playing soccer since 5th grade and has had a passion for the game as long as she could remember. She loves soccer because it brings people together from around the world. A big travel enthusiast, Coach Val studied abroad in Spain her senior year of high school, where she got to attend multiple Real Madrid games, her favorite soccer team. She continued her education at Kansas State University, where she obtained a B.S. in Marketing. CoachVal now works in Kansas City at a marketing agency, and during her free time enjoys coaching and making an impact on children, just as others did for her. 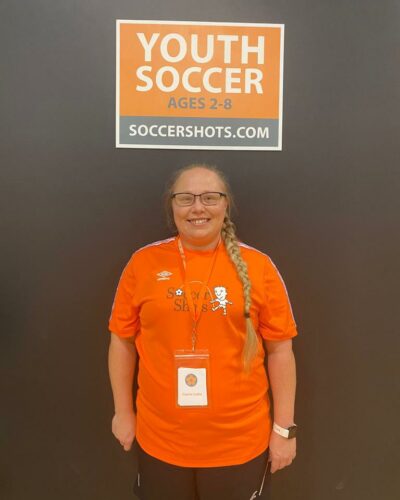 Coach Callie was born and raised in Kansas. She started playing soccer in 2nd grade, all through two years of college. She brings with her 13 years of competitive swim coaching, 3 years of soccer coaching, and 2 years of softball coaching experience to our organization.  Coach Callie has been a Nanny, preschool teacher,  and Juvenile Services Officer. When she isn’t coaching,  Callie enjoys her free time with her teenaged daughters and husband. Coach Callie’s favorite rule in life and in practice is “Try your best!” 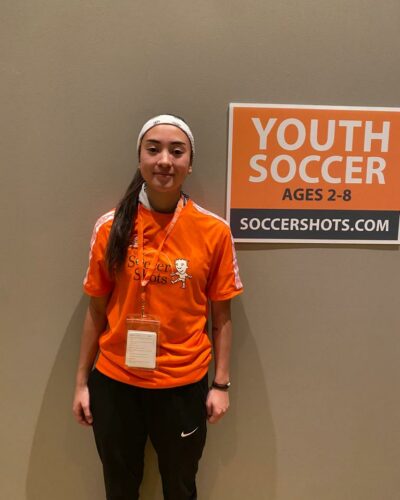 Coach Laura grew up in Bogotá, Colombia where she started to play soccer in one of the best Soccer Clubs in the city, Goal Start (with Coach Jay as her head Coach –Now, both of them work with Soccer Shots!). Coach Laura played at Trinidad State Junior College in Colorado for 2 years, winning Player of the year Award twice in a row with the region 9 of the NJCAA. She is now following her career at MidAmerica Nazareth University with a Scholarship to get her Bachelor’s degree in Kinesiology and posterior getting a certification as a Athletic Trainer. Coach Laura also enjoys painting, biking, and listening to music. She hopes to play professional soccer in the future.

Coach Kevin grew up in Overland Park, Kansas with his one older brother, one younger sister and one family dog named Shadow. He started playing soccer at the age of 5 and even played at the academy level receiving numerous college offers! He received his USC coaching license and has been coaching for 2 years. Coach Kevin also loves to train daily, play pick-up soccer games with friends, play FIFA and also watch soccer matches in his spare time. He plans to attend K-State University with a major in Biomedical Engineering. His main goal is to become a professional coach and continue to work with children and adults of all ages. 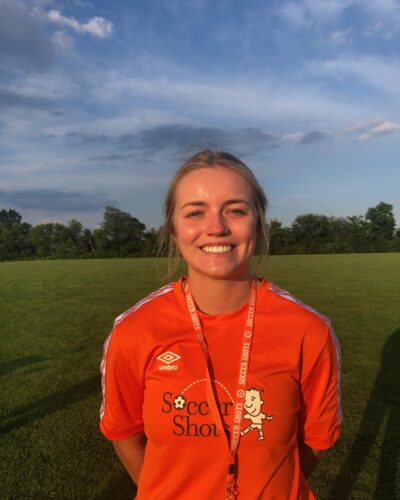 Coach Ashlyn grew up in Overland Park, Kansas and currently attends Baylor University in Waco, Texas. She is majoring in Biochemistry on a pre medical track as she is passionate about giving back to others. Ashlyn has played the sport of soccer ever since she was three years old. She played in high school, in club, and is currently playing at the club level in college. She loves helping to teach children both character and soccer skills. She also enjoys walking her dogs, swimming, painting, running, and listening to music. 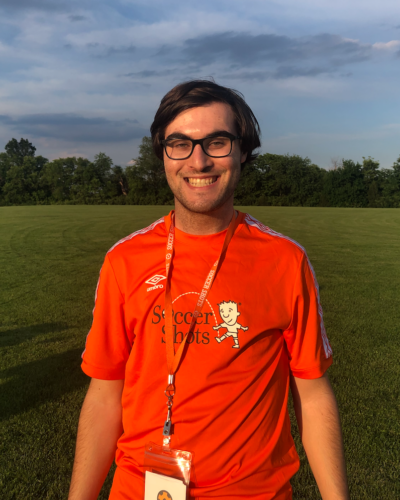 Coach Matt grew up in the Kansas City area, and played soccer at Bishop Miege High School. He is currently attending Trinity University and intends to pursue a Master’s Degree in School Psychology after completing his undergraduate degree. He’s played soccer since he was three, and been a Barcelona fan since he was eight. Lionel Messi has always been an idol to him, as he too was very small for his age, and Messi showed him that you don’t have to be the biggest or strongest in order to have skills and succeed. Coach Matt loves working with children, and he wants to help them enjoy the game as much as possible. 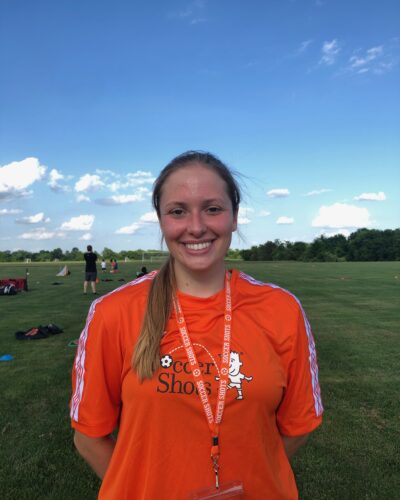 Coach Nicole was born in San Salvador, El Salvador. She grew up playing soccer on the streets and the first club she played was with boys, she couldn’t play games with them just practice because it was a boys team only. At the age of 11, she moved to Kansas to play with her first ever girls team called Extreme Club. ”It was a fun experience playing with other girls” Said Coach Nicole. She kept playing in clubs and also high school. After she graduated from high school she attended to Allen Community College, now she transferred to MNU to pursue her soccer career. She is now a junior and she is looking forward to next fall season at MNU. Things she enjoys to do is go to the beach and play soccer at the beach, listen to music and play futsal. ”If I could go pro with futsal in the future it will be a big goal for me”.