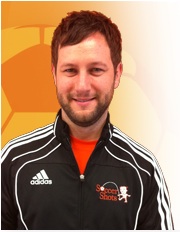 Micah Straight, Executive Director
Micah and his family have lived in Philadelphia for the past decade. In addition to directing Soccer Shots,  he works with newborn to 5-year-old children as a pediatric physical therapist and has recently started The Aspen Grove School for 6 week old’s to 5 year old’s with a focus on outdoor play and community.

Micah grew up playing competitive soccer in Northern Virginia. He was a member of the Olympic Development team in high school and served as a coach and referee for youth soccer leagues. He went on to play at Messiah College, where he earned a Bachelor’s degree in Biology.  He moved to Philadelphia in 1998 to complete a Master’s degree in Physical Therapy at Drexel University.  Micah has a passion for the positive development of children and adolescents. He believes in the power of a mentor in a young child’s life and value the role soccer can play in positively impacting the health and development of children, their families, and their communities. 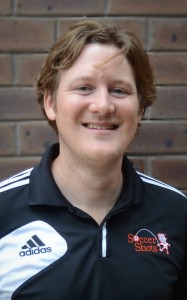 Thomas Rockett, Director
Thomas is a graduate of Eastern University with a master’s in urban studies and community development. Over the past three years, he has provided therapeutic support to elementary school children with behavioral needs in the Philadelphia School District. Thomas also volunteers with a summer recreation program for urban children in the Francisville neighborhood of Philadelphia.

Thomas’s first connection to sports as a child was through organized soccer leagues. The exciting environment of soccer grew into a great passion for all sports. In college, he played on an intramural soccer team at Louisiana State University.

Thomas has a desire to see children grow in character and skill through their interactions and the challenges of the beautiful game.

Billy graduated from the Haub School of Business at St. Joseph’s University in 2014 with a degree in Sports Marketing and Spanish. In his spare time, he is a competitive Ultimate Frisbee player and Captain for a Men’s club team called Philadelphia Patrol, which competes at a National level. You can also find him playing around the city in local leagues, through an organization called PADA. COYS.

Rachel graduated from Temple University with a major in Spanish and a minor in French. She lived in Germany for many years with her family throughout her childhood and moved to Philadelphia for college. Rachel and her family have been living in Philadelphia for the past decade plus.

She came to Soccer Shots as an already mother of two fully supporting their mission and witnessing first hand through her children’s participation in the program, how their thoughtful and developed curriculum can have an impact on and off the field.