Please head over to www.seattle.soccershots.com to see current classes available in your area!

Growing up with two brothers in Lima, Peru, Coach G has been kicking a ball since as long as he can remember. He graduated from the University of St. Thomas in Houston, TX, where he played in the central midfield for the collegiate soccer team and earned his degree in finance and economics. He is a native Spanish speaker, and counts healthy cooking, as well as eating, among his hobbies. Coach G is grateful for the positive experiences the beautiful game has given him and wants to pass this on to the youth of the great city of Seattle. 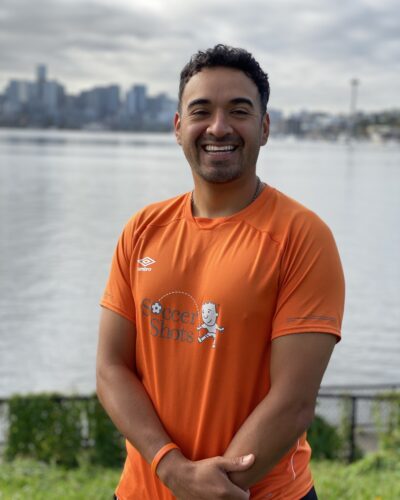 Born and raised in Houston Texas, Victor went on to play at the University Of St. Thomas where he helped the program win its first conference title. While attending university, he earned a BBA in finance. Son of Fortunato and Esperanza Falcon, immigrants of Hidalgo Mexico, Victor grew up with four siblings and two dogs named Pele and Chelsea. Victor was introduced to the game of soccer at an early age. He pursued Division I club soccer in Houston throughout his youth. Victor is excited for the opportunity to positively impact the lives of young soccer players, just as coaches once impacted his.

Hayley, who is also a Houston native, moved to the Seattle area in 2016. Although she was not a soccer player, she spent majority of her youth playing volleyball and swimming competitively. She moved to Phoenix, Arizona in 2009 where she met Coach G and they have been together ever since! Together, they have a son named Tiago who was born in June 2020. Her passions include doing anything creative, practicing yoga, hiking, cooking healthy meals and working out. She is so excited to be a part of the Soccer Shots Seattle family!