Background: After years of coaching high school, college, and club soccer, Landon started Soccer Shots Southwest Virginia in 2014. He played soccer at Hampden-Sydney College before becoming an English teacher in Roanoke City Public Schools. He received a masters degree from the Virginia Commonwealth University’s Center for Sport Leadership. In addition to Soccer Shots, Landon currently serves as the technical director of Star City Soccer Academy and director of the Star City Soccer Foundation. He and his wife, Meredith, have a little boy named Mac.

Soccer: Landon began playing soccer in the backyard chasing around all of his older siblings. He grew up playing with Roanoke Star and then Patrick Henry High School before Hampden-Sydney College.

Other Interests/Hobbies: Landon’s favorite things, besides spending time with his family, outside of soccer are mountain biking and skiing.

Wildcard: Legend has it, Landon did not start talking until he was four years old. 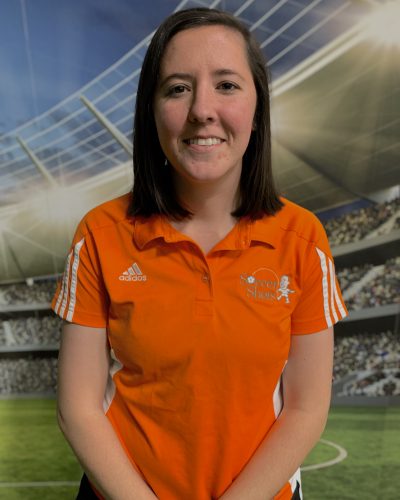 Background: Coach Tori was born in Colorado Springs but has spent most of her life in Roanoke. She studied communication and minored in athletic coaching at Bluefield College. Tori has three brothers and two sisters.

Soccer: Tori played soccer at Bluefield College, serving as team captain from 2014-16. She has played the sport ever since she was three. She holds USSF E and F coaching licenses.

Other Interests/Hobbies: Tori also enjoys playing and coaching basketball in addition to soccer. Outside of sports, she likes snowboarding, playing the guitar, and spending time with her family.

Wildcard: Coach Tori loves traveling. In addition to many places in the U.S., she has been to Ireland, Germany, Netherlands, Switzerland, France, and the UK.

If you have a passion for positively impacting children through youth sports, we’d love to talk to you.