ENROLLMENT IS NOW OPEN FOR OUR SUMMER SEASON!

Get ready for summer! Our Summer 2022 season is available to view, and enrollment is open! 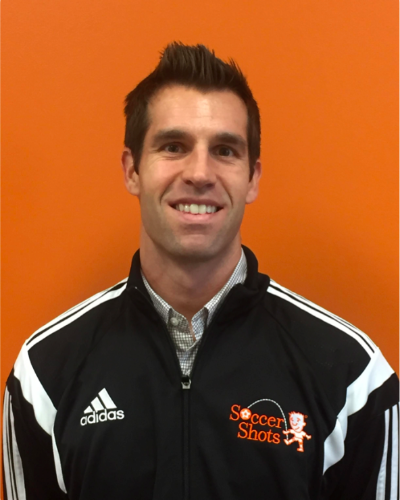 Coach Chad graduated from Klein High School and earned a B.A. in Communications and an M.A. in Health Administration from Midwestern State University in Wichita Falls, Texas. As team captain his junior and senior year, Chad helped lead the Mustangs to multiple conference championships and a National tournament appearance. Chad then moved to Virginia Beach to play two professional seasons with the Mariners, and then spent the next five seasons with the Charlotte Eagles of the United Soccer League.

As the owner and executive director of Soccer Shots Woodlands, Chad is passionate about coaching kids of all ages and enjoys the opportunity to serve and give back to the youth of his hometown.

Coach Harley is a graduate of Sam Houston University where she majored in kinesiology with a minor in marketing.

Harley has played soccer since she was four years old. She played four years of varsity soccer at Steele High School in Cibolo, Texas where she was first team all-district. Harley was a D1 and Premium defensive player for eight years with the Lions competitive soccer club in Schertz, TX; she also played on a co-ed adult team.

Harley enjoys working with children to help them develop physical literacy and good movement skills as these are important aspects for early childhood development. In addition to this, she wants to help each child to develop in themselves integrity, trust, honesty, courage, self-esteem, as well as cultivate the love to play soccer. In Harley’s free time she enjoys hanging out with her daughter, husband and her five dogs. 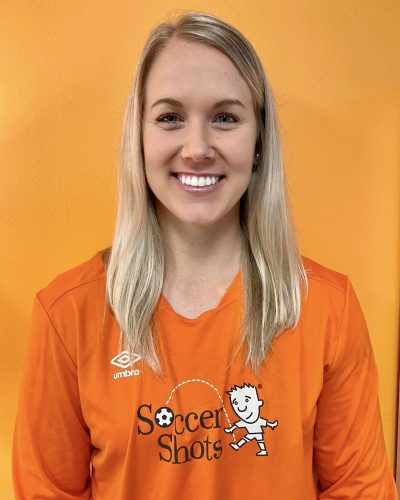 Sarah Black comes to us all the way from Hershey, Pennsylvania! She has a Bachelor of Science degree in Sports Management from Kutztown University, where she also played 4 years of collegiate soccer.
She has worked for Soccer Shots for the past 3 years in various positions across the country. Her energetic personality is infectious and she is extremely passionate about impacting the lives of children through a game she has played her entire life.
We are so excited to have Coach Sarah as part of our team, so if you see her on Soccer Island, be sure to give her a big high-five! 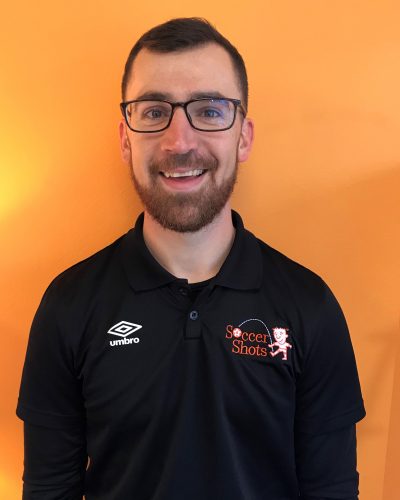 Coach Remy is a University of Houston graduate (Go Coogs!), where he earned his Bachelor of Science degree in Education.

Remy grew up playing soccer here in The Woodlands area. He played most of his soccer recreationally, which he continues doing today. He also plays and coaches softball competitively.

With a 4-year-old daughter of his own, Remy experiences first hand the early stages of childhood development. He loves helping children grow and makes having fun a priority during his soccer sessions. Family is everything to Remy, as he devotes his free time to his wife and daughter. His daughter, Aubrey, is an active Soccer Shots participant. Our curriculum has helped her not only in soccer, but in other stages of her life as well.

As a former restaurant manager, and more recently a Children’s Museum manager, Remy has always found himself in a leadership role. Remy loves to coach and prides himself on his patience and outgoing personality. He hopes to encourage children to believe in themselves, and further develop their physical performance through a game he loves dearly. 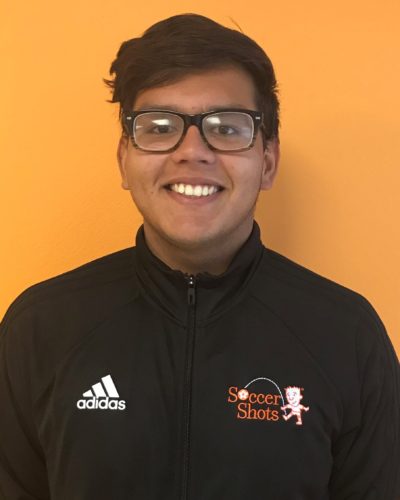 Coach Saul graduated from Caney Creek High School where he played on the JV and varsity soccer teams. Saul is currently studying sports marketing at Lonestar College – Montgomery where he is also playing goalkeeper for the men’s soccer team.

Coach Saul began playing soccer at the age of four, and joined his first school team in junior high. He spent his early years learning to play soccer with a plastic bottle filled with rocks and trash cans!

On coaching for Soccer Shots, Saul says, “It’s amazing seeing what kind of impact Soccer Shots has on the children. It’s great to teach the beautiful game to the next generation and make a difference in their lives.”

In his free time, Coach Saul likes hanging out with friends, playing soccer, running, and going to state parks. 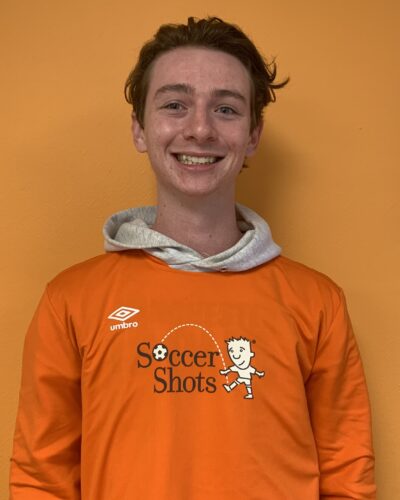 Casey has been playing soccer since he was four and joined club soccer when he was ten. His favorite position was outside mid.

In his free time Casey enjoys photography, being outdoors, traveling, and hanging with friends. He loves working with children – building their skills, watching them develop, and sharing his love for the game. Being a Soccer Shots coach has filled his days with smiles – those he receives from the kids and those they bring to him. 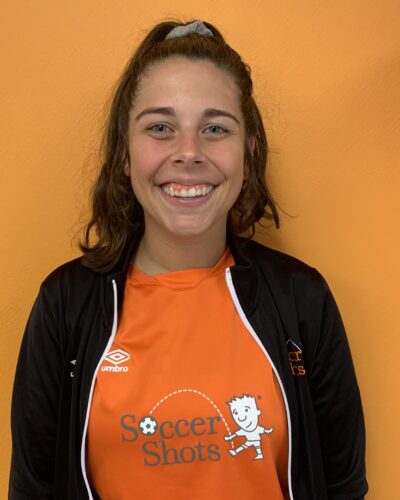 Coach Stefanie grew up in Nederland, TX where she played on the girls JV and varsity teams for Nederland high school. She then went to Stephen F. Austin State University and earned her degree in Health Science and hopes to become a physical therapist.
Stefanie has been playing soccer since she was four and continued to play intramural and club soccer while she attended SFA.
Stefanie hopes that coaching soccer can help kids become more confident in themselves and open up to others just like it helped her when she started playing.
In her free time Stefanie enjoys working out, hanging out with friends, and watching scary movies. 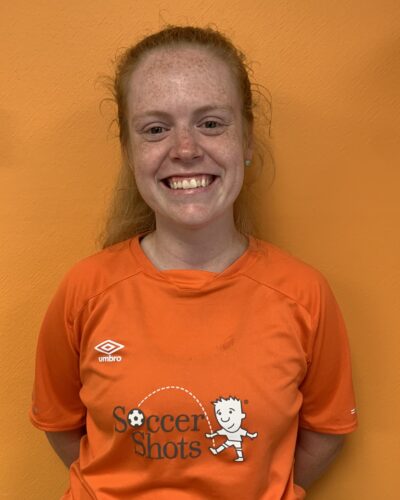 Coach Samantha has been playing soccer since she was just four years old! A former Division I player, she was also the youngest licensed referee in her home state of Louisiana. Now a resident of Tomball, she plays on an indoor co-ed team and enjoys adult pickup games.

Samantha has been babysitting since she was twelve years old and was drawn to be a Soccer Shots coach for the opportunity to encourage children in a positive way while developing a love for the game of soccer.

Coach Samantha is currently working towards her Occupational Therapy degree and hopes to one-day work with disabled children and veterans. 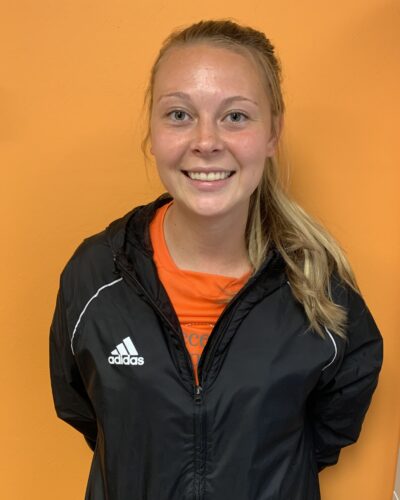 Before becoming a Texan, Coach Tori lived in Colorado and Ohio where she had many opportunities to advance her soccer career. As a high school player in CO, her club team won a regional and state title, ranking her team 17th in the nation. She also played for the women’s team at Bowling Green State University where she helped them win the MAC regular season and tournament.

Now a marketing student at Sam Houston State University, Tori continues to play for fun while spending time with her family and her bulldog, Phoebe.

Coach Tori’s favorite part about being a Soccer Shots coach is watching the kids develop new skills while having fun! 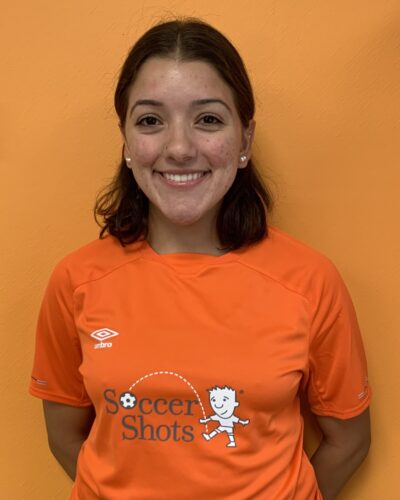 A native of Cuba, Coach Liz grew up in Miami where she was an avid soccer and flag football enthusiast. She moved to Houston in 2019 and played soccer her senior year for Klein Collins High School.

The eldest of four children, Liz grew up playing with and caring for her younger siblings—and also volunteered in daycares as a teen. “Each child is different in their own way, and they come up with the funniest ideas, which always puts a smile on my face. I am glad I get to part of their growth and learning at Soccer Shots!”, says Coach Liz.

Liz is also a graduate of the Montgomery County Fire Academy and is actively pursuing a career in firefighting. 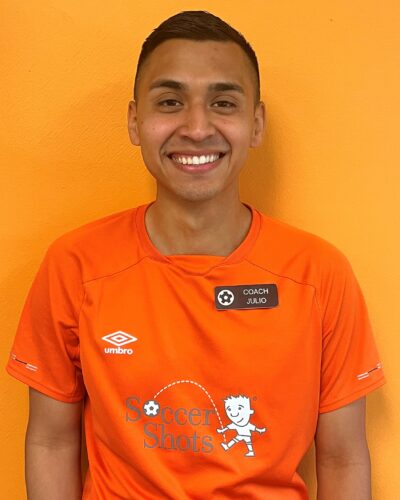 Coach Julio graduated from Brazoswood High School and earned a B.A in Sport Management and Information Systems from the University of Mary Hardin-Baylor in 2017. In his senior year he scored the winning goal to lead the soccer program to its first NCAA appearance where they made it all the way to the Sweet 16. After graduation Julio pursued his professional soccer dream and played for a soccer club in Spain. In March 2020 he then traveled to Costa Rica to try out with another club. The pandemic restricted travel and he had to return home.

Julio is married and now lives with his wife in Conroe. In his free time, he enjoys playing video games and spending time with his family. He is an avid F.C Barcelona fan and his favorite player is Lionel Messi.

Coach Julio is hoping to be a positive influence on and off soccer island. His favorite part of Soccer Shots is being the first experience for kids in learning how to play soccer and teaching them the basic understanding of how the game is played. 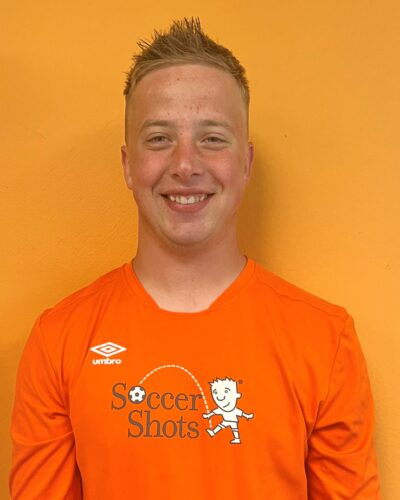 Before becoming a Texan, Coach Wyatt lived in Colorado and Wyoming.  While in Wyoming, he studied Agribusiness at Casper College.   Coach Wyatt’s background consist of farming and ranching.  He worked on his family’s ranch where they raised livestock and grew hay, corn and wheat.

In addition to playing and coaching soccer, Coach Wyatt is pursuing a new career path and is currently attending real estate school.  He also loves spending time with his family and his dog, Phoebe. 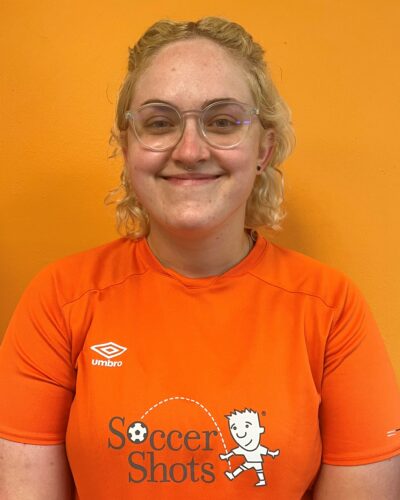 Coach Tori grew up in Wichita Falls, Texas.  Her family relocated to the Woodlands during her high school years.  Her soccer career stated when she was just 4 years old.  Her love and soccer skills led her to play competitively in Dallas where she was on an Olympic development team.

Coach Tori is very excited to help the next generation of soccer players build their skills, their love for the game, and having fun just playing soccer!  She is excited about the coaching opportunity where she can contribute to each child’s growth of soccer knowledge, skills and abilities.

In her free time Coach Tori enjoys reading, art, and taking care of her pets. 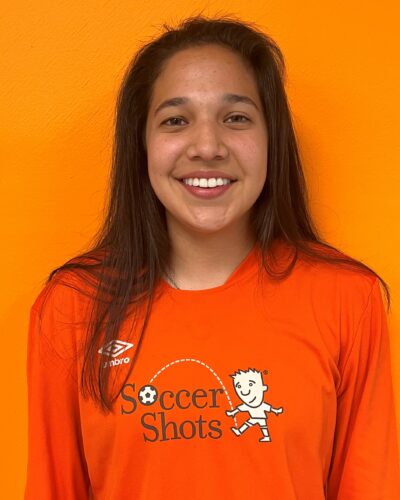 Coach Ceci is very athletic and has been playing soccer since she was 8 years old. In addition to soccer, Coach Ceci has played basketball, tennis & ran track.

Early on, she excelled as a defensive player mostly playing either left or right back, but when challenged to play goalkeeper, she found she was well-suited in this position too. Ceci’s senior year on the Klein High School varsity team was spent tending goal and contributed to an 8-1 season.

Coach Ceci’s love for the game inspired her to become a Soccer Shots coach where she experiences joy in contributing to the growth and development of young children while coaching.Spending time with her family, listening to music, and playing with her niece are Coach Ceci’s favorite things to do when not coaching soccer at Soccer Shots.