As the premier Children’s Soccer Experience, our mission is clear – at Soccer Shots Central Florida, we aim to positively impact children’s lives. 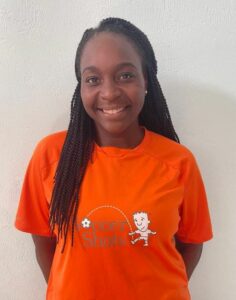 Coach Kim is a native of Orlando, FL, and played multiple sports growing up. Kim first began playing football, both Flag and Tackle. At first, she wanted a career in Football, but was later introduced to Soccer and found that she really enjoyed it. Fortunately for her, she was able to play collegiate soccer at Polk Community College and University of Central Florida (UCF), gaining National recognition as a 2 time All- American and Female Athlete of the Year at Polk Community College along with All Conference Team at the University of Central Florida. Professionally, she played for 7 years in the US, as well as traveling around the world to play in places like; China, Turkey, and Haiti. Kim has worked with the Youth of Central Florida both as a Coach, Private Trainer and Technical Director over the Girl’s Elite Program. Kim Holds her F and D1 Coaching License for US Soccer and FYSA. In 2009, Kim earned her Associate of Science Degree in Elementary Education, as well as an A.A in Liberal Arts Polk State College in Lakeland, Florida. In 2011, Kim graduated from the University of Central Florida  with a Bachelor of Science Degree in Interdisciplinary Studies with a focus on Education and Communication and a Minor in Health Sciences to later study, Nursing. With that degree under her belt, she received a job offer at One School of the Arts, a private Christian school as an Athletic Director for 2 years, then later became the schools’ Academic Guidance Counselor, with a focus on College and a career Readiness for 4 years. Kim enjoys being an Educator and feel as though it’s a position of honor. Kim values family time and allows for her schedule to slow down enough to spend quality time with her husband, Jim and their three children, Micah, Zachary and Haley. A native of upstate NY, Matt played collegiate soccer at Herkimer Community College and West Virginia University, winning two national championships at Herkimer.  Professionally, he played for eight years, winning a championship for the Harrisburg City Islanders USL 2 team in 2007. Matt was also a member of the US National Futsal team during his professional career playing in Brazil and Belgium. He has worked extensively with youth soccer players over the past 20 years, coaching for one of the top clubs in the country. Matt was inducted to the NJCAA Hall of Fame in 2009 and was also recognized with being a part of the All Decade team for Junior College Players.  He is an active member of the National Soccer Coaches Association of America (NSCAA). 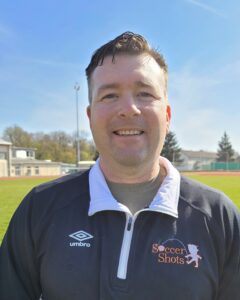 Ryan Murphy,  Owner
Ryan grew up in a sports family. His father was a baseball and basketball player and his younger brothers played football, basketball and hockey. So naturally, he chose to play soccer. He has been involved with soccer in some form or fashion — either as a player, coach, official or parent — for the last 38 years. After attending high school at St. Joseph Academy in St. Augustine, Ryan attended Texas A&M University on a Navy ROTC scholarship. Ryan graduated with a B.S in Chemistry and then subsequently received his master’s in Engineering Management from Old Dominion University.  After graduating college Ryan was commissioned in the Navy, and served 10 years on Active duty in the Navy as a Submarine Officer.  He has three great children, Connor, Mackenzie and Saoirse.  Ryan decided a change of pace was in order and in 2009 started a Soccer Shots franchise in North East Florida. And in 2021, he expanded with the Soccer Shots Orlando team, and opened Soccer Shots Central Florida. Ryan is also a current Naval Reservist. Ryan keeps active by playing adult soccer and powerlifting. Ryan holds a Level VI Diploma from the National Soccer Coaches Association of America, and an “F” License from U.S. Soccer.