Kicking off this Summer! Soccer for ages 2-8 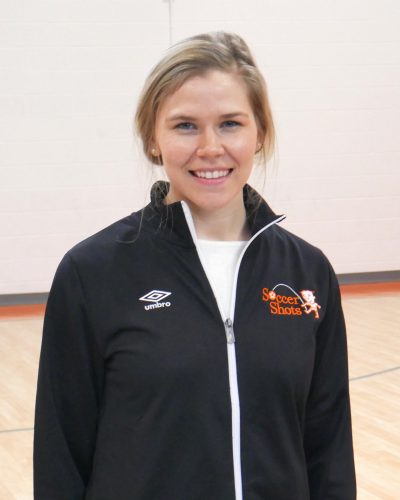 Anika (also known as Ani), a West Michigan native, started her soccer journey in Kalamazoo as a member of TKO Premier. Following her youth career, Anika moved to Chicago, IL where she played soccer and ran track and field at North Park University. Her performance at the college level landed her on the CCIW All-Conference team and earned her the opportunity to play in Jönköping, Sweden. After her playing career came to an end, she began coaching in Texas at Texas A&M Soccer Camps and Soccer Shots Austin. Life brought her full circle and back to Kalamazoo where she graduated from Western Michigan University and began pursing her passions as an entrepreneur. Anika spends her free time thrifting for vintage clothing, staying active and cheering on her WMU Broncos.

Coach Jen Grew up in Brookfield, Wisconsin where she began playing soccer at the age of eight. She played travel soccer for the Brookfield Soccer Association through high school, where she was able to play teams from all over the country and world. Jen continued her soccer career at the University of Wisconsin- Eau Clair and began to pursue her degree in education. During this time Coach Jen also coached camps for the Milwaukee Wave and a U-14 travel team. Once her playing career ended, Jen focused on her career in teaching. Jen has taught children of all ages, but has focused on early childhood education for the past 10 years. With a love of teaching and being active Jen was looking to teach children in a different way, and decided to continue her education by getting her Bachelors in Kinesiology – Exercise Science. Coach Jen moved all the way from Chicago to become part of the Soccer Shots Kalamazoo team! She says the best part about coaching with Soccer shots is “Seeing the children gain confidence each and every week.”

Coach Hailey, originally from California, has a passion for working with children. Coming to Soccer Shots with a background of working in early childhood education for six years and over a decade of playing soccer herself. Hailey started playing soccer at the age of five for AYSO Battle Creek. Not only did Hailey play soccer, but she also played softball and performed in Marching band. In her spare time Hailey enjoys traveling, cooking, and spending time with her family. Coach Haileys favorite part of coaching is watching the children get excited when completing a new skill.

Coach Travis grew up in Jackson, MI, where he spent most of his time playing soccer. Travis now attends Kalamazoo College working towards his degree in Psychology. He currently plays as a defender for the K-College Hornet’s men’s soccer team. When he is not playing soccer, you can find Travis bike riding or spending time on the lake with his friends and family. Travis loves meeting all of his soccer friends and enjoys all the energy they bring to each session.

Coach Taylor grew up in Commerce Township, MI where he played soccer throughout his youth and high school years. Taylor currently attends Western Michigan University, where he is studying Comparative Religion and is a teacher’s assistant. Coach Taylor is super excited to coach all of his soccer friends! His favorite part of coaching is watching the children “get it for the first time.” A fun fact about Coach Taylor is that he is a fraternal twin.