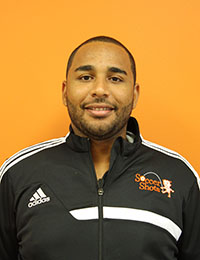 Johnny was born and raised in the Cayman Islands where he grew up playing soccer and baseball from the age of 4. He graduated from Wesleyan Christian Academy H.S. and attended Indiana Wesleyan University. In 2012/13 he played semi-professional soccer in the Cayman Islands Premier League as a Center Forward for Future F.C. Johnny also appeared on the Cayman Islands National Teams U-14, U-17, U-21 and U-23. Johnny has extensively coached children from the ages of 2 years to 11 years in both soccer and baseball. He believes that introducing sports to children at a young age helps build skills that will promote teamwork, healthy lifestyles and lifelong friendships. He is passionate about coaching to teach children of all ages the beautiful game of soccer.

Coach Gabriel is originally from São Paulo, Brazil. Soccer has been a passion of his ever since he had a ball at his feet. He is currently studying sports management at Palm Beach State College. He loves kids and soccer so much that he started a group teaching kids the game in his community. He currently plays soccer for fun and has played for several club teams and school teams.