As the premier Children’s Soccer Experience, our mission is clear - at Soccer Shots Southwest Florida, we aim to positively impact children’s lives. 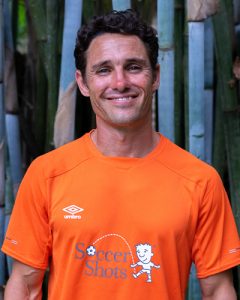 A native South Floridian, Walter graduated from Florida State University earning a B.S. in Physical Education with an emphasis in Sports Management. For the last 14 years he has served his community as both a Firefighter for the Iona McGregor Fire District and youth soccer coach for children playing at the recreation and club level. Through coaching he has experienced the joy of the game and the lasting positive impacts it has on children. He believes that Soccer Shots provides the perfect opportunity to continue building stronger youth beyond the game. In his spare time, Coach Walter can be found seeking outdoor adventure on local trails, tinkering in his garage, or hanging out with his wife Britney and three children, Jayda, Walter, and Kennedy at the park. 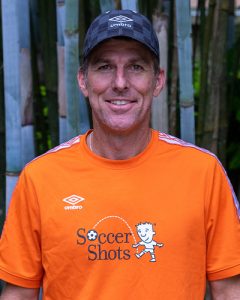 Mike was born and raised in Fort Myers, FL. He graduated from UCF earning a B.A. in Graphic Design. He was a stay home Dad for 12 years for his twin boys, Keller and Luke who are 16 years old and also love soccer! Mike has played soccer his whole life and has coached sports at different levels for over 25 years. He loves teaching the valuable life lessons that come from playing team sports and is always looking for opportunities to grow. Mike is very involved in the Church and is passionate about serving the Lord both locally and globally. He believes in the power of teams, is constantly building relationships and loves being a part of the Soccer Shots community. Mike is passionate about leadership development, creating positive cultures and encouraging others! His favorite football team is Liverpool FC – YNWA! Coach Carlos was born in Naples, Florida but was raised in Brownsville, Texas. He began playing soccer since the age of 3 playing in tournaments all over Texas, Mexico, and in Florida at the IMG academy. He graduated from Our Lady of the Lake University in San Antonio, Texas with a Bachelors degree in Kinesiology. Coach Carlos, played in high school, college, and in a semi-professional soccer team after his collegiate career was over in Texas. He was the team captain in all three teams respectively. While in college, he was a scholar athlete and received all conference and all tournament team honors. Coach Carlos, became a PE teacher at an elementary school before moving to Florida and has a passion for working with children. He hopes to make a positive impact not only with the children but in the community as well. Carlos is responsible for hiring, training and managing our amazing team of coaches. Coach Sarah can’t wait to meet all of her new soccer friends out on Soccer Island! Coach Sarah grew up in Southwest Florida and currently lives in Fort Myers. She started playing soccer at 5 years old out at Bayshore, and she continued to play through high school where she was the starting varsity goalie all four years. She played various levels of soccer during her career, but her most favorite thing about soccer is making new friends, learning new skills, and having fun. Some of her favorite things to do are baking and cooking for others, going to Disney World with her best friend, and watching movies. Sarah is responsible for keeping all of us in line and staying on track!